The Statue of Unity is a tribute and memorial to the ‘Iron Man of India,’ Sardar Vallabhbhai Patel.

He was the first deputy prime minister and home minister of independent India and a participant in the non-violent Indian independence movement of Gandhiji.

The statue has been built to propagate his vision of an independent India and inspire the citizens of his patriotism and freedom struggle.

Sardar Vallabhbhai Patel is highly revered for his leadership in uniting 562 princely states of India with a major part of the former British Raj to form the single Union of India.

The statue is made out of bronze and is the tallest statue in the world.

The project was described as a ‘Tribute to India from the people of Gujarat.’ Statue of Unity is located on the banks of river Narmada in Gujarat on the river island of Sadhu.

It overlooks the Sardar Sarovar dam. The statue is an engineering marvel. The height of the statue is astonishing, and the fact that it is completed in a record time of 33 months.

Here are a few interesting facts about the statue of unity-

The design of the statue was submitted by Padma Bhusan awardee Indian sculptor Ram V, Sutar. Statue of Unity is a much larger replica of the statue of the leader installed at Ahmedabad International airport.

The head is held high; a shawl is flung from the shoulders, and hands are on his side. He is depicted wearing a dhoti and sandals. The statues were built by a public-private partnership, and the government of Gujarat raised the money.

Thousands of tourists visit the statue daily. The timings for visiting the statue are from 9 a.m. to 6 p.m. The entry fees are 120 INR for adults and 60 INR for children.

Soon, train to the Statue of Unity – PM Modi to inaugurate Kevadia station on January 16, 2021

The statue was inaugurated on 31st October 2018 on the occasion of the 143rd birth anniversary of Sardar Vallabhbhai Patel.

Due to the natural aging process of metals, the statue of unity is expected to turn from its original bronze color to green color in the next hundred years.

It has a viewing gallery at the height of 500 feet from the river bed. This is known as the observation deck, which accommodates up to 200 visitors at a time.

The structure contains a three-star lodging facility consisting of 52 rooms, known as the Shrestha Bharat Bhavan. The premises has a food court, museum, a memorial, garden, research center, and a convention center.

A valley of flowers is developed along the bank of the Narmada river. Initially, three models of the statue were designed measuring 3 feet 18 feet, and 30 feet; the largest model was approved, and Earth and the detailed 3D scan were performed. This formed the basis for the bronze cladding. The height of 182 meters is chosen to match the seat numbers in the legislative assembly of Gujarat.

The project was supervised by a consortium of Turner Construction, Michael Graves and Associates, and the Meinhardt Group. It took 87 months to complete the project, 15 months for planning, 40 months for the construction, and two months for handing over by the consortium. Narendra Modi served as the chief minister of Gujarat then.

Over 3000 workers 250 engineers were involved in the construction of the statue. The local tribes belonging to the Tadvi tribe had problems developing the statue and tourism infrastructure surrounding it.

They have been offered land compensation and been provided with jobs. People of other villages also opposed the construction of the statue.

A laser technology light and sound show is projected on the Statue of Unity. Every evening except on Mondays, a colorful lighting system is accompanied by a beautiful narration of the history and life of Sardar Vallabhbhai Patel, along with his contribution to the Indian independence movement.

The valley of flowers is popularly known as the Bharat Van and is spread across 24 acres of land on the banks of the river Narmada. It had begun with 48,000 plants in 2016 but currently has reached up to 22,00,000 plants.

There are several photo booths and selfie points in this spot. It has ornamental flowers, trees, shrubs, climbers, herbs, and creepers. It is a lush green area and is visited by thousands of tourists every day.

The Sardar Sarovar Dam is the third highest concrete dam in India after the Bhakhra Nagal Dam in Himachal and Lakhwar in Uttar Pradesh. It is also ranked as the second-largest globally, with an aggregate volume of 6.28 million cubic meters after the Grand Coulee Dam in the USA. The Cactus Garden is located near the Statue of Unity, which exhibits various cactus and succulents.

An interesting fact about the Narmada valley near the statue is that recent archaeological excavations have revealed that Rajasaurus Narmadensis, an endemic species of dinosaurs, existed in the Narmada valley during the cretaceous period.

A replica of this endemic dinosaur is created and exhibited for the visitors. Children’s nutrition park has been built here, which is a unique theme park; it was built as a part of the Kevadiya Integrated Development based on the theme of ‘Sahi Poshan Desh Roshan.’ It enlightens children about healthy eating habits and nutritional values.

There is a mall named Ekta Mall, which symbolizes unity in diversity and is a hallmark of Indian culture is situated near the statue of unity. It is spread over an area of 35000 square feet. It has shops retailing Handicrafts and handlooms, which is for the establishment of the artist clusters of the country.

A garden known as the butterfly garden is situated on the banks of the river Narmada near the statue. This has more than 70 species of butterflies, and the garden covers an area of 10 acres. It has 150 species of nectar plants and is a nature lovers’ delight.

There is Ekta nursery, which was envisioned by Shri Narendra Modi Ji, the Prime Minister of India, near the statue. It was set up to built social awareness about eco-friendly practices; it has around a lakh of plants.

There is a handicraft center where you can experience making bamboo crafts, organic pots, leaf utensils, and purchasing them. You can also witness the technology of hydroponics, which is basically soilless farming. 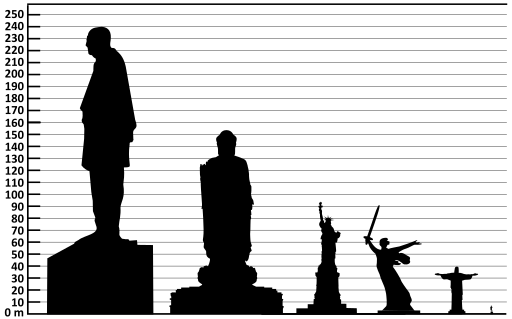 It would be best if you visited this statue of world record and impeccable architectural marvel.

Also, Read The City of Joy – Top 10 Places to visit in Kolkatta.