You can reach Sikkim by air. The first airport of the state is operational from October 2018, called the Pakyong Airport. You can also reach Sikkim by the closest operational airport, the Bagdogra Airport. You can also use roads to reach the state. The National Highway 10 links Siliguri to Gangtok. The closest significant railway are the Siliguri and New Jalpaiguri junction in West Bengal. The best time to visit Sikkim is from March to October.

Don’t miss out on these places in Sikkim-

The very heart of the state, the incredibly alluring capital,  Gangtok is famous for it’s pleasant weather. Abounding in clouds, Gangtok is one of the most popular hill stations in India. Gangtok forms the base for various trekking expeditions. The main attractions in Gangtok include the Ban Jhakri falls, Tsomgo Lake, Ganesh Tok, Rumtek Monastery, Enchey Monastery. During months of March to May, wild rhododendrons bloom giving the region a colourful mystical appearance. The exotic hill station of Gangtok is famous for its beautiful market. Tibetan handicrafts, hand-carved wooden handicrafts, premium quality liquor, exquisitely woven woolens art, and culture of the city.

Nearest airport- The closest airport is the Bagdogra Airport in West Bengal. The distance between Bagdogra and Gangtok is 124 kilometers.

02 The Nathula Pass and Tsomgo Lake

Situated on the Nathula highway at a height of 12400ft above sea level, the Tsomgo Lake is a high-altitude lake in India and a popular tourist attraction for its enchanting scenic beauty. It is enveloped by white snow-capped mountains and lush green alpine forest. This glacial lake is surrounded by thousands of blooming flowers. This lake is considered sacred by the Sikkimese.

Nathula is one of the highest motorable roads in the world. This mountain pass joins Sikkim with China. This pass is famous for its enchanting beauty and beautiful environment. The best time to visit the Nathula Pass is during the summers. During monsoons, there are landslides and during winters it is covered with thick snow. Nathula Pass has Baba Harbhajan Singh Temple which has an eerie backstory to it.

Best time to visit Nathula Pass and Tsomgo Lake- You can visit the pass any time except for the monsoon season. During the monsoons it is extremely risky to travel on the pass. The pass remains closed on Monday and Tuesday every week. 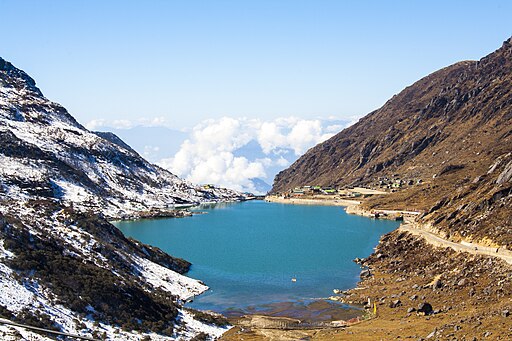 The third highest peak in the world, Kanchenjunga is a majestic mountain peak with a plethora of flora and fauna. Kanchenjunga base camp trek is one of the most exciting treks in the world. The adventurous trek gives you opportunities to witness the stunning panoramic views of the valley, mountains, lush greenery, tribal villages, and yaks grazing on the pastures.

Best time to visit Kanchenjunga- The best time for trekking on Kanchenjunga are from March to mid-May and October to late November.

Nearest airport- The closest airport to the mountain is the Bagdogra Airport which is around 70 kilometers away.

Literally meaning ‘top of the sky’, Namchi is a popular tourist hotspot in Sikkim. There are two gigantic statues situated on hill tops in Namchi, one of Lord Shiva and other of Guru Padmasambhava. Namchi abounds in spas, bars, and luxury hotels. The Rock Garden is another striking feature of the area and draws thousands of tourists every year. Namchi has a lot of shops selling crafts and souvenirs.

Closest airport to Namchi- Bagdogra Airport is the closest to Namchi and is 102 kilometres from Namchi.

Situated in North Sikkim, Lachen is one of the most beautiful tourist destinations in Sikkim. It forms gateway to sacred lakes like the Gurudongmar and Tso Llamu. This small town is famous for its apple orchards and pine-covered valleys. You can visit the Rhododendron Sanctuary, Chopta Valley, Green Lake which lie in the vicinity.

Lachung is another tourist hotspot in North Sikkim with a spectacular tourist site. The town abounds in snow-capped mountains, waterfalls, and orchards of apple, peaches, and apricots which tempt tourists to this town. Yumesamdong is popularly known as Lachung Zero Point is located at 15,300ft above sea level. It’s perpetually covered with snow. For every adventure seeker, it is a lifetime experience.

Best time to visit Lachen and Lachung- May to October.

A famous breathtaking town in West Sikkim, Pelling has become a major tourist attraction in the state. It’s natural scenic beauty makes it ideal for a holiday destination. You can visit the Rimbi Waterfall, Darap Village, Rabdentse Ruins, Peymayangtse Monastery, and the Sangachoeling Monastery located here. Pelling forms a base for several treks. There are sites for rock climbing, mountain biking, paragliding, etc.

Best time to visit Pelling- September to May.

Sikkim has much to offer to every tourist out there. From mountain biking, paragliding, rock climbing, trekking, bunjee jumping, camping to star and nature gazing, Sikkim is an enchanting mystical world far away from the hustle and rat race of life. Calm your self down at a monastery or explore natures best creations, savour the north-eastern delicacies like the finger-licking culinary delights like momos, thupkas, sisnoo or shop for the Tibetan handicrafts. Sikkim should be on the top of the bucket list for adventure seekers and nature lovers.