Before knowing about the Gagron Fort, first, you should have a basic idea about the city of Jhalawar.

This city was earlier known as Brijnagar, and it is a place bestowed with rich natural affluence of fauna and flora.

Unlike other cities in Rajasthan, Jhalawar has a water-laden grassy landscape apart from being rocky. With red poppy fields and orange orchards scattered across the city, Jhalawar looks vibrant and close to nature.

The city is one of the major contributors to the production of citrus in the country.

Moreover, this city with varied cultural heritages comes with several palaces and forts from the Mughal and Rajput eras. You can also find many religious centers as well in this beautiful city.

The Gagron Fort is located on the bank of the river Kali Sindh in Jhalawar City in Rajasthan. The first attraction of this fort is, it is surrounded by nature on all sides. 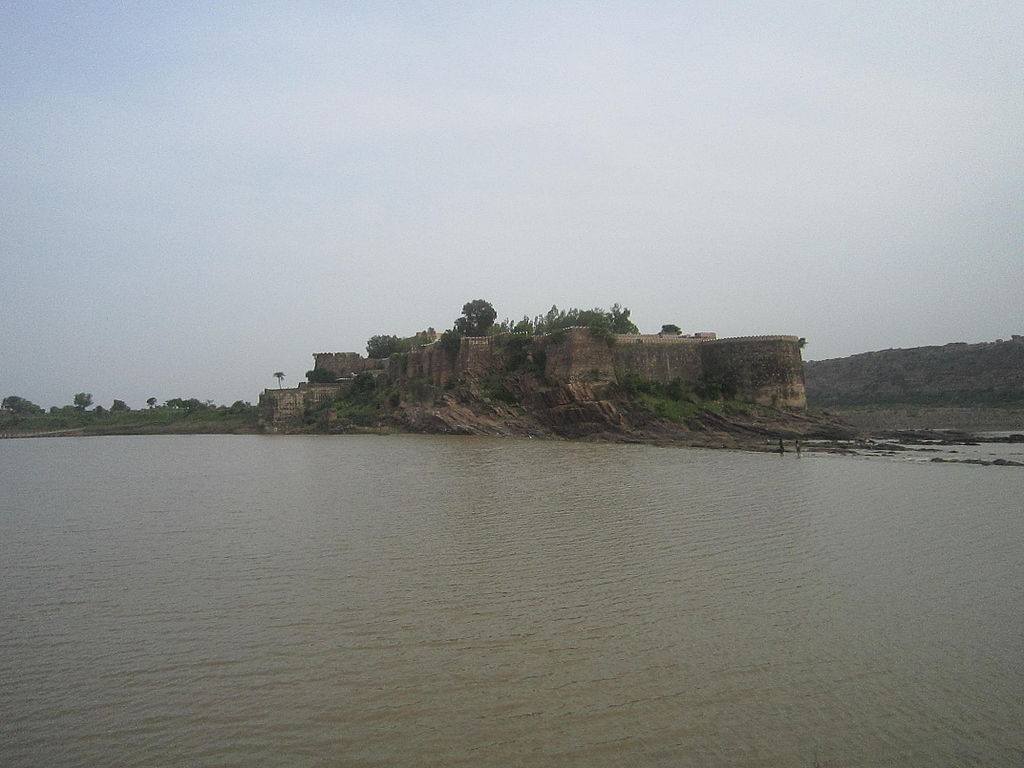 The fort is encircled by the water of Ahu River and Kali Sindh on three sides and one side with greenery. It is a massive fort, and you can even get lost inside the fort.

It is always recommended to visit the Gagron Fort with a tourist guide or someone who knows the palace.

As you enter the area of the fort, you will realize the difference you can feel as it is extremely peaceful and comforting. Being away from all the pollution of a city is marvelous.

Find the Gagron Fort Watch Point from where you can get the view of both Ahu and Kali Sindh rivers joining together.

The sight of the scenery from the top of the watching point is mind-blowing, and it is not easy to express the beauty in words. You should surely go and visit this fort if you are planning for a trip to Rajasthan.

The entire fort is spread across an area of about four sq. km. You can also find a bridge near the viewpoint that is constructed over the Kali Sindh River.

If you cross the bridge and reach the other end, then that area is called Kalisindh Anicut. Once you reach that point, you will get a glimpse of the full view of Gagron Fort.

You will understand the height at which the fort has been built if you look at the fort from the Kalisindh Anicut.

On your visit to Rajasthan, you can see many forts on hills, and Gagron Fort is one of them to be a part of the UNESCO Heritage Site List.

The barracks, palace, and stables retain the Rajput aura in the fort. The Gagron Fort belongs to the Royal Rajput families and the history of the fort can make you feel apprehensive.

Several battles were fought many centuries ago, and one of the battles is known as the “Battle of Gagron”.

Sultan Mahmud Khilji was defeated by the Rajput King Rana Sanga. As the battle was not for seizing territory or kingdom, Rana Sanga treated Sultan Khilji with respect.

An auspicious crown and a belt passed from many generations, starting from Sultan Hoshang Shah were gifted to King Rana Sanga by Sultan Mahmud Khilji.

Several battles occurred in the area of Gagron Fort, and the place also beheld the act of “Jauhar”. The Jauhar ritual is performed by women during ancient periods in the kingdoms.

When the kingdom is about to lose a war, all the women will dress in their wedding costumes, they light up a huge fire and jump into the fire. The reason behind performing this ritual is because the Indian women hold their dignity, culture, and tradition as supreme importance.

When the enemy comes over to the kingdom winning the battle, the losing kingdom’s women may be taken as slaves and may even be captured. To avoid this, all the women there, performed this ritual of burning themselves to protect their self-esteem and to prevent future torturing. The place where this ritual was performed is still there in Gagron Fort and is known by the name Jauharkund.

The Jhalawar Fort is situated in the center of the town which was built by Maharaj Rana Madan Singh. To bring out an extra exquisiteness to the fort, his successors added beautiful paintings inside the rooms, but the paintings can only be seen with permission from authorities.

Moreover, the women’s palace known as Zenana Khas has beautiful frescoes on the walls and mirrors which are the key examples of the Hadoti School of Art.

By Air: The closest airport is Indore that is 240 kilometers away, and Jaipur Airport is at a distance of 345kms

By Road: Jhalawar lies on Highway No. 12 and is connected by bus to many cities in Rajasthan.

By Rail: Jhalawar has a newly-constructed railway station that is 2 kilometers from Jhalawar city.

This is one of the ancient museums in Rajasthan which is just 15min drive from the Gagron Fort. Jhalawar Government Museum was constructed in 1915 A.D. and the museum has a distinct collection of unique paintings, idols, and manuscripts. Situated in the middle of the city, the museum is also a part of the fort.

Situated at a distance of 4.8km from Gagron Fort, Bhawani Natyashala was created in 1921 A.D which is one of the most unusual theatres in India.

In this shala, the Parsi plays and cultural events would take place. This architectural phenomenon gives one an admirable insight into the world of theatre and art.

This Natyashala is known to have an underground passage, allowing horses and chariots to appear on stage.

With complexly carved pillars and arched gateways, Chandrabhaga temples stand on the banks of the glorious Chandrabhaga River.

The region where these temples are located is known for the Shri Dwarkadheesh Temple that was built by Jhala Zalim Singh in the 11th century.

You can also find Shantinath Jain Temple which has some stunning murals and sculptures. A half an hour drive from the Gagron Fort will take you to Chandrabhaga Temples.

At a distance of 12km from Gagron Fort, you can see this beautiful temple. Do not get confused with the Sun Temple at Konark, Orissa.

This Sun Temple is situated in Jhalrapatan which is 97 feet tall. Dedicated to Lord Shiva in the 10th century, this temple is popularly known as Padmanabha Temple.

It looks similar to the sun temple at Konark with a finely carved spire on the temple. The spire has been built in layers and the size is decreased as the height increases, forming a seven-storeyed pillar structure.

The tallest steeple is a combination of miniature towers. You can see the base of the spire is made with large pillars closer to each other to make the foundation much stronger.

This temple was first reinstated in the 16th century and later in the 19th century. The columns and arches at the entry are luxuriously carved with images of gods, goddesses, and other Hindu motifs.

Also seeing the old tiles engraved with figures of the Gods-Vishnu and Krishna-on the outside walls of the temple are worth it.

Located close to the Dwarkadheesh Temple, about 11 km from Gagron Fort, this herbal garden has a wide range of herbs and medicinal plants.

Some of them include Varun, Laxmana, Shatavari, Stevia, Sindoor, and a lot more.

This temple was made by the founder of the city of Jhalawar, the Jhala Zalim Singh. Dwarkadhish Temple, built-in 1796 A.D is on the banks of the lake, Gomati Sagar. Later, in 1806 A.D, an idol of Lord Krishna was erected there. It is only about 11kms from the Gagron Fort to reach her.