Jodhpur, the city of Thar Desert is the second-largest city in the state of Rajasthan.

The city is also known as the Blue City as all the forts, palaces, temples, Havelis, buildings, and houses are painted in shades of blue.

On your visit to Rajasthan, you would not want to miss visiting Jodhpur as the city is enriched with forts and palaces.

The people in Jodhpur and nearby areas are known as Marwaris since the city is recognized to be built in the ancient capital Mandore, the state of Manwar.

The Mehrangarh Fort is located 125 meters above the skyline of Jodhpur. The landscape of the fort is located on a rocky ridge, and it has seven gates.

One of the gates known by the name Hayapol was built by Maharaja Man Singh to commemorate his victories over Jaipur and Bikaner.

Another gate is known as Fattehpol, meaning victory gate, constructed by Maharaja Ajit Singhji to remember his victory over the Mughals.

The polished red sandstone makes this fort looks beautiful and classy. Rao Jodha was the legend behind the construction of Mehrangarh Fort in 1459.

The fort is enclosed by imposing thick walls, and inside the boundaries, you can see several palaces with detailed carvings and sprawling courtyards.

The road to the fort is adventurous and winding. On the second gate of Mehrangarh Fort, one can see the imprints of the effect of cannonballs fired up by the armies of Jaipur.

The foundation of the fort was fixed on May 12th, 1459 by Jodha, with the help of Rao Nara. The hill on which they planned to build the fort was known by the name Bhakurcheeria, meaning the mountain of birds.

To build the fort they had to relocate the occupant on the hill, a loner called Cheeria Nathji who was considered as the Lord of Birds. He was not willing to move from the place even though they tried many times.

Later, Rao Jodha had to take help from another saint who was more powerful than Cheeria Nathji. That saint was a female warrior sage, Shri Karni Mata from Deshnok.

When the king requested her to convince Cheeria Nathji, she agreed and met with the lord of birds and asked him to move straightaway. Since she was of superior power, he moved at once.

But he cursed Rao Jodha, saying, Jodha! May your citadel suffer from the scarcity of water forever. The king tried to pacify Cheeria Nathji by constructing a house, and a temple for him in the fort.

The base of the fort was laid by Karni Mata since Rao Jodha understood the power that she possesses. If you check the status of forts in Rajasthan, you can see, only the forts of Jodhpur and Bikaner persist in the hands of Rathors, and the foundation stone for these forts was laid by Shri Karni Matha, the powerful saint.

The rest of the forts in Rajasthan were abandoned for certain reasons. The local people consider this as a miracle done by Shri Karni Matha.

The Mehrangarh Fort is open from 0900am to 0500 pm every day, and there is an entry fee to see the fort. Have a look at the following entry fee rates:

You can get tourist guides here to understand the history and other facts about this elegant historical fort.

By Air: About 5 km from the city center and nearly 8.5 km from the Mehrangarh Fort is the Jodhpur Airport. The airport is linked by flights from and to towns like Jaipur, Delhi, and Mumbai.

From the airport taxi facilities are accessible.

By Rail: Jodhpur Junction is the nearest railway station which is just 6.1 km from the Mehrangarh Fort.

Trains from the main cities of India like Mumbai, Jaipur, Delhi, Kolkata, Jaisalmer, Chennai, and Bengaluru have stops at this station.

By Road: The city is well connected with roadways, and tourists can take a rickshaw or taxi to reach the fort. Using major highways, travelers from the main cities in India can reach Jodhpur.

At the foot of the Mehrangarh Fort is where the Chokhelao Bagh can be seen. It is an old garden which is more than 200 years old garden.

You can experience the sounds, scents, qualities of the 18th century in this beautiful garden. This garden is now a carnival of nature with a diversity of plants and flowers.

On the upper terrace of flower beds, you can the trees and plants changing their colors according to each season.

During the night, it is magical to see the Mehtab Bagh, also known as the moonlight garden on the lower terrace of white flowers coming alive in the moonlight.

The types of flowers you can see on the lower terrace are Chandni(Tabernaemontana coronaria), and the Kamini(Maurya Ecotia), a sweet-smelling flower.

At a distance of 5.3 km from the Mehrangarh Fort, Umaid Bhawan Palace is located, built by Maharaja Umaid Singh in 1929.

The reason behind constructing this palace was to counter a scarcity that had hit the state. This castle also holds the name Chittar Palace, as the stones used for construction were taken from Chittar Hill.

It was Mr. HV Lanchester, a British architect, who panned the design of the palace. The construction took about 16 years to finish.

The architecture elegance in which the fort was built, includes Indo-Saracenic, Western Art Deco, and Classical Revival styles.

The Pearl Hall or Moti Mahal is where the royal families have their private audience. Located in the fort of Mehrangarh, this luxurious room was made with colored glasses on the windows and the ceilings decorated with gold leaves, mirrors, and seashells.

The royal throne in the Moti Mahal is known as the Srinagar Chowki. Raja Sur Singh built the Mahal, and there are five cubicles in the room, leading to hidden balconies where the queens sat during the court proceedings.

It was never possible to get the sight of the queens to anyone in the room.

In the compound of Mehrangarh Fort, you can the Sheesh Mahal, made of glasses.

It is also known as the glass palace of Jodhpur. The construction of this Mahal is unique as there are intricate walls of mirror works from the ceilings to the floors.

You can also see brightly painted religious figures with mirror works too, that accentuate the beauty of Sheesh Mahal.

The word Phool in Hindi means flower, and yes, as the name depicts, this is a flower hall that is the most expensive one in the palace.

Phool Mahal was the pleasure dome of the Maharajas, and gold was used to construct the Mahal, bought from Ahmedabad in the state of Gujarat.

Rao Jodha’s favorite goddess was the Chamunda Mataji. Hence, he brought the idol of the goddess to the Mehrangarh Fort from Mandore.

This temple is located on the southern side of the major fort. The families of Maharahas and Rajas consider Devi Chamunda Mataji as the adopted goddess (Isht Devi), and the deity is worshipped even by the local people in Jodhpur.

A large number of devotees visit the Chamunda Mataji Temple during the Dussehra Festival to offer prayers and devotion to the goddess, who also reflects in many forms of Mara Shakti – Durga.

These are two lakes, located near Fateh Pol at a distance of just 2.2 km from the main Mehrangarh Fort. Built for conserving natural water, these ancient lakes are 500 years old.

You can also get a view of these lakes from the chief fort. It is one of the perfect places for tourists to relax completely, as the area is quiet and serene.

If you like adventure activities, the rocky mountain nearby is perfect for trekking.

People who visit Ranisar Padmasar enjoy bathing in the peaceful lakes, watching the flock of birds hovering over the lake.

At a distance of 8.4 km from the Mehrangarh Fort is the Jodhpur Government Museum, located in the Umaid Garden.

The museum has a rich collection of ancient relics like an armory, textiles, miniature paintings, local art and crafts, manuscripts, images of the Jain Tirthankaras, and paintings of famous rulers.

This museum is also a library and a zoo comprising of stuffed animals. It also has a section for exhibiting military objects like wooden biplane models and brass battleship. 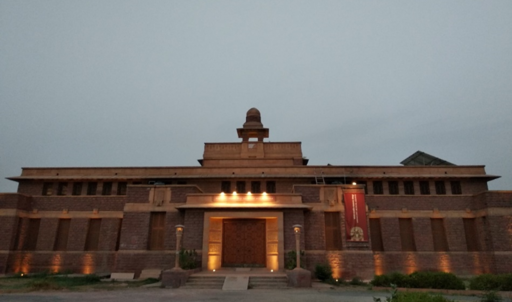 Located in Jodhpur, at a distance of just 1 km from the Mehrangarh Fort is the Jaswant Thada located. In 1899, this was built in the memory of Maharaja Jaswant Singh II by his son Maharaja Sardar Singh.

Jaswant Singh made many fine investments to the state, and he also made attempts to bring down the crime level, constructed railways, and raised the economy of Marwar vastly.

For the construction, intricately carved thin sheets of marbles were used to emit the sunlight through it.

Other works to enhance the beauty of the monument are the carved gazebos, a small lake, and a tiered garden.

The Mehrangarh Museum Trust (MMT) looks after the Jaswant Thada, which is open to the public. MMT is operating a museum in the memorial, that showcases portraits of many Marwar rulers with informative moral instructions.

Music festivals like Rajasthan International Folk Festival and the World Sacred Spirit Festival are conducted on the ground of this monument.

When you travel to the north of Jodhpur, you will reach the ancient capital of Marwar called Mandore. The place is famous for its historical significance.

Many palaces of the former rulers of Jodhpur are found here. There is a difference in the architectural style of other palaces and the ones in Mandore.

What you can see in Mandore are the cenotaphs built in the style of Hindu Temples, whereas palaces in other regions are chhatri-shaped and normal patterns of Rajasthan.

These are not just the list of tourist attractions in Jodhpur. Many other palaces and villages are located in this city, where you can experience the tradition and culture of people in Jodhpur. Moreover, you have many bazaars where you can purchase authentic Jodhpur style handicrafts, apparel, accessories, and more.

Also Read: Places to visit in Rajasthan – The Abode of Kings