Indian Eagle – Eagle is the name given to large birds of prey that belong to the Accipitridae family. They are large and powerful birds with heavy bodies and strong beaks.

Some species of India eagle are huge in size with a length of around 24 inches (2 feet) with a wingspan of around 60 inches (5 feet).

There are 24 species of Eagle are found in India. Here is a list of some honorable mentions.

They are dark brown in color and relatively smaller in size. The below of the eagle are speckled with tiny white spots. They are usually found on trees under their canopy, waiting to catch small prey.

It usually makes 4 to 5 short chips that sound like a whistle. They are found in the Andaman Islands.

This eagle is dark black in color. It soars over forests and is mostly found in the hilly regions. They mainly hunt for mammals and small birds, especially the ones in the nest.

Its curved claws allow it to pick up eggs or small mammals like squirrels from trees. 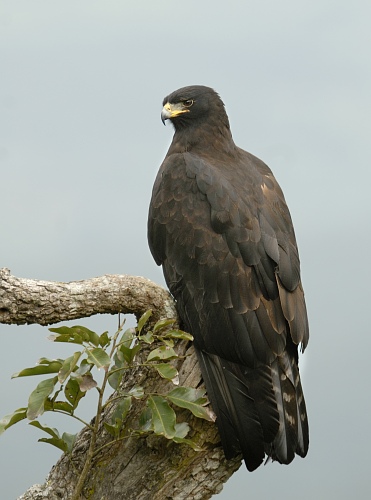 This eagle is found in the hilly and mountainous regions of India. They are medium in size with a whitish body which contrasts with the dark wings.

They are usually found soaring at great heights. The Bonelli’s eagle measures around 65 to 70 cm in length and weighing around 2kgs with a wingspan of around 170 cm.

This eagle is medium in size with long-fingered flight feathers and a long square tail. It has feathered legs giving it the name booted eagle.

It is mainly found in forested areas with open patches and often in hilly regions.

The Changeable Hawk-eagle is also known as the Crested Hawk-eagle. It is mainly found in India and Sri Lanka.  This eagle builds its nest of sticks in trees and lays a single egg.

They can easily camouflage in the tree and wait to pounce on their prey.

This eagle is medium in size and dark brown in color with rounded wings and a short tail. It has a black and white fan-shaped crest which gives the eagle a thick-necked appearance.

It has bare facial skin with yellow feet. The below side has white and yellowish-brown spots.

This is a large bird and mostly migratory in nature. It has feathered legs and a large dark-colored eagle. It’s a predator which mostly feeds on small mammals, birds, and reptiles.

They prefer to build their nest in large trees. Mostly found in central and north India.

It is a fierce-looking eagle with a dark brown body, grey head, lighter underbelly, and white legs.

They mainly feed on fish and build their nests close to water bodies such as rivers, streams, lakes, lagoons, reservoirs, marshes, swamps, and coastal areas.

The Indian spotted eagle which is also known as Clanga hastata is a large bird that also belongs to the Accipitridae family. These eagles are usually found alongside buteos and sea eagles.

The steppe eagle also belongs to the Accipitridae family and is a large bird that hunts for its prey in dry habitats, such as deserts and open drylands.

The Steppe Eagle species is larger and darker as compared to the tawny eagle.

The total length of Steppe eagle is around 24 inches (2 feet) with a wingspan of around 60 inches (5 feet). A full-grown engle is much bigger compared to what we have mentioned.

This video covers all 24 species of Indian Eagle.

India is a beautiful country with forest, dry lands, desert, mountains, rivers, sea, beached and is blessed with all variety of Flora and Fauna. Owing to this India has a wide variety of Birds, Animals, reptiles, insects, tress, herbs and plants are found here in abundance.

It’s a must visit place for international tourists who love nature and enjoying its serenity.