The peacock was named the National Bird of India in 1963 due to its extensive religious and mythical ties to Indian traditions. The GREAT INDIAN BUSTARD, THE SARUS CRANE, BRAHMINY KITE, and SWAN were among the contenders.

The giant bustard was a close second choice as the national emblem. Since the International Council for Bird Preservation’s Tokyo summit in May 1960, the topic of selecting an avian symbol has been actively discussed.

The Indian Board for Wildlife was tasked with the responsibility of picking the national bird, taking into account the views of the states.

The pick was made after consulting with state governments and gauging public opinion through the news media.

Numerous factors were used to make this selection. To be really ‘national,’ the bird must be widely spread throughout the country. It must be recognizable by the average person. It must lend itself to formal representation, e.g. abstract representation in official publications. It must not be confused with any other nation’s bird emblem. It should be connected with tales and stories from India. The peacock was an ideal candidate.

In Legends and Culture

Because of its stunning beauty, the peacock has long been a beloved figure in Indian literature. Folklore holds that when a peacock displays its beautiful plumage, it is a sign of oncoming rain.

They are well-known as the conveyance animal of the Hindu god Kartikeya. A peacock feather was frequently adorning Lord Krishna’s hat.

Males who are suitable can form groups with multiple females, each of whom will lay three to five eggs. Wild peafowl, in fact, frequently nest in forest trees and congregate in groups known as parties. 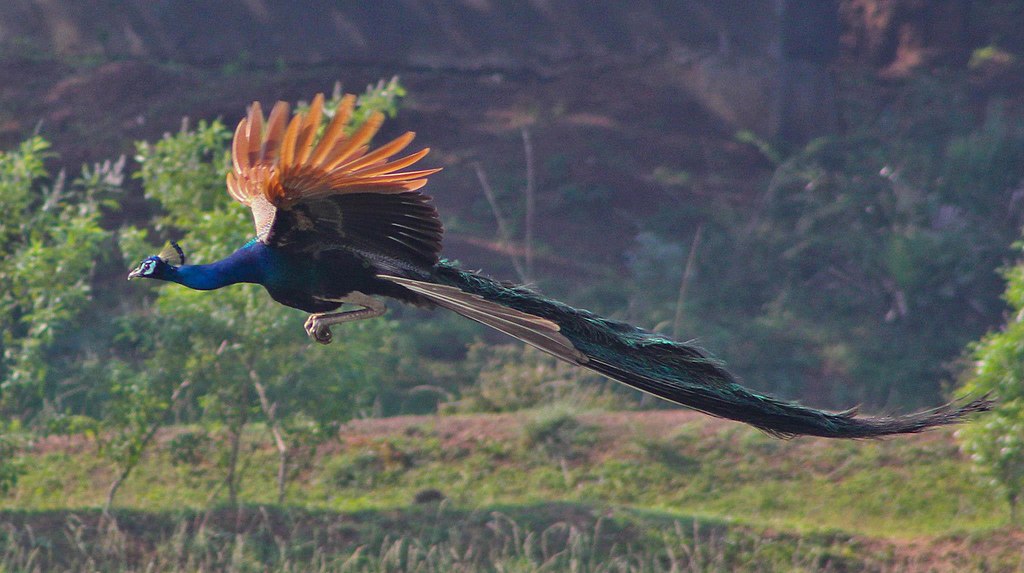 Description of the National Bird of India

Peafowls are among the largest flying birds. (Ostriches, emus, and other similar birds are bigger but unable to fly.) A peacock’s tail feathers are 5 feet (1.5 meters) long—longer than the bird’s body—and may be presented in a beautiful fan of vivid hues.

These long feathers grow from the bird’s back rather than the tail. Males elevate the much shorter tail feathers below them to lift them.

Peahens are more subdued in appearance than males, having mostly brown backs and a white belly. Females lack long tail feathers but do have a crest and green neck feathers on their heads.

Indian peafowls are indigenous to India and Sri Lanka, both of which are located in South Asia. They have been brought to various nations as displays in parks, zoos, and nature centers, as well as domestic pets. Adult peafowl has a head and body length of 3 to 4 feet and a tail length of up to 5 feet.

Peacocks feed on insects, plants, and tiny creatures on the ground. There are two types of peacocks that are commonly seen. The blue peacock lives in India and Sri Lanka, whereas the green peacock is in Java and Myanmar (Burma).

In African rain forests, the Congo peacock, a more unusual and lesser-known species, may be found. People have admired and kept peafowl as pets for thousands of years, especially the blue peacock. While some unusual color combinations have emerged from selective breeding, wild birds are naturally vibrantly colored. They may be harsh and have a hard time getting along with other domestic birds.

They are generally found in open lowland forests. In the wild, they may be found in a wide range of habitats, from semi-arid grasslands to moist deciduous forests. They love to live in close proximity to bodies of water. They also live in human-populated places like farms, villages, and, in certain cases, metropolitan areas. They eat and nest on the ground, but they roost in tree branches.

Historically, Indian peafowls were restricted to the Indian Subcontinent, which comprises India, Nepal, Bhutan, Pakistan, Bangladesh, Myanmar, and Sri Lanka. Throughout human history, it has been brought to other parts of the world, including Europe and America. Semi-wild populations may be found in a variety of locations, including Australia, New Zealand, and the Bahamas.

Peacocks are polygamous in their natural habitat. The peahen lays 4-6 eggs in the ground, preferably in a tiny hole, and the eggs are incubated for 28-30 days until hatching.

The mother feeds the chicks through her beak for around 7-9 weeks when they are in her care. The mother peahen then goes out foraging with her young, who she may be instructing on foraging techniques.

Indian peafowls live for an average of 15 – 20 years in the wild, according to the Wildlife Conservation Society.

Males are larger than females; Male Peafowls may have tails that are 4 to 5 feet in length, depending on the species. When it comes to weight, Peacocks range between 9 and 13 pounds, whilst Peahens range between 6 and 9 pounds.

Like other members of the Galliformes family, both males and females of the Peafowl have strong metatarsal spurs, which are often referred to as “kicking thorns,” which they employ to defend themselves against predators.

Its legs are powerful, and it has three robust forward-facing toes and one robust backward-facing toe. They are very agile. Because of their poor wing surface to body weight ratio, the majority of Peafowl species are unable to fly long distances.

The extravagantly gorgeous tail, often known as the train, is the peacock’s most noticeable feature. After 4 years of hatching, the train has completely matured. These 200 odd display feathers sprout from the bird’s back and are part of the massively enlarged upper tail coverts.

The train feathers have been changed such that they no longer contain the barbs that hold the feathers in place and are thus just loosely connected. The hues are the product of intricate microstructures that generate an optical phenomenon. Each train feather terminates in an oval cluster with an eye-catching eyespot or ocellus. Back wings are greyish brown in hue, short, and dull. The thighs of the Indian Peacock are buff in color, and they have a spike on the leg above the hind.

The female peafowl or peahen lacks any showy colors. They are mostly brownish grey in appearance, with a brownish crest similar to that of the peacock. They have dark brown tail feathers and no complex train. They have a whitish face and throat, a brown rear neck and back, a white belly, and an upper breast that is metallic green. Peahens may grow to reach 0.95 m long and weigh between 2.75 and 4 kg.

Color variation may be seen in Indian Peafowl species. The black-shouldered variant is caused by a mutation caused by genetic diversity within the population. White peafowls with startlingly white feathers and cream and brownish patterns are the consequence of a mutation in the genes that produce melanin.

Peacocks are protective and gregarious birds that dwell in big groups. They become aggressive in the face of strangers or fresh peafowl approaching their territory. They usually travel in groups of eight to ten.

A gathering of peacocks is referred to as a muster, ostentation, or prides. A gaggle of peafowl is known as a bevy of them. The brilliantly colorful tail trail of a peacock’s principal function is to attract peahens for mating purposes.

Peahens are intrigued by and drawn to peacocks performing a distinctive dance. In certain studies, peacocks were discovered to be able to imitate a copulatory cry in order to attract additional peahens. Peahens choose a peacock based on its size, color, and number of tail trains shown. When peahens have completed mating, they will build a nest for their eggs. The male, on the other hand, will go out looking for other peahens to mate with.

These tail feathers, known as coverts, form a unique train that spans more than 60% of the bird’s entire body length and includes vibrant “eye” patterns in blue, gold, red, and other colors. The huge train is utilized in courting displays and mating rituals.

It may be stretched into a beautiful fan that spans the bird’s back and touches the ground on both sides. Females are said to select their partners based on the size, color, and quality of these extravagant feather trains.

The need for the beautiful feathers used for decorative purposes threatens the Indian peafowl. Poachers hunt and kill them for their flesh as well. They may be a nuisance if they reside near fields since they consume agricultural grains. Although this is not a common practice.

Due to its position as the Indian National Bird, Indian peafowl has received particular conservation programs. National bird hunting is unlawful. While the overall Indian Peafowl population is not known, it is sufficient to designate it as the ‘Last Concern’ in the IUCN Red List.

Facts about the National Bird of India