The dam and power plant are both named after Rajasthan’s warrior Maharaja Rana Pratap. 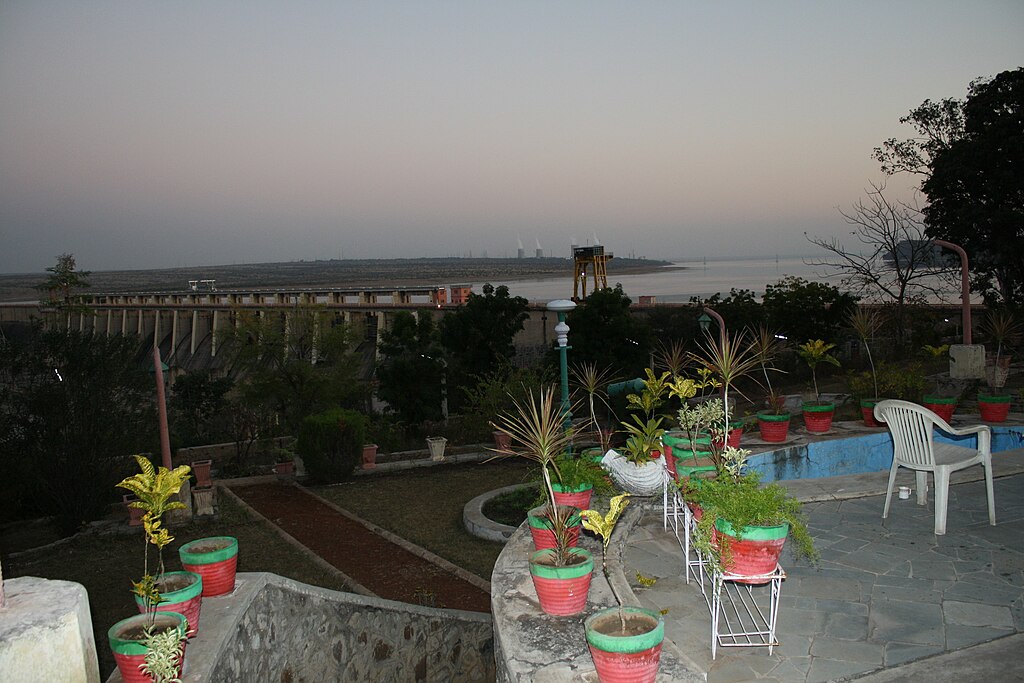 There is no photography allowed on the dam. However, visiting this dam is a delight, and occasionally, when the dam brims with water as a result of heavy rainfall, its gates are opened to enable surplus water to pour out, creating a heart-stopping spectacle of water overflow (called Chaadar Chalna in local lingo).

The dam generates 172 MW (four units of 43 MW each) of hydropower at the dam toe powerhouse adjacent to the spillway, using discharges from the Gandhi Sagar Dam and extra storage generated at the dam by the captured catchment area.

Since commissioning, the anticipated generating capacity of 473.0 GWh has been surpassed in the majority of years.

OVERVIEW ABOUT THE LOCATION

This moderately populated hamlet, which is surrounded by several small settlements, is well known for its atomic energy production. It is India’s largest nuclear power plant.

The Rana Pratap Saagar Dam (on the Chambal River) is located there to aid in creating electricity. Because the electricity is generated by nuclear fission, a heavy water plant is also located to act as a moderator for the process.

Rawatbhata is not just about natural beauty; during the last several years, it has gained an unofficial reputation as a thriving bird sanctuary, home to numerous rare kinds of birds. However, the government appears to have done little to promote the area to tourists.

This heaven blossoms to another level during the monsoons; hence would suggest you travel to this destination during monsoons to take the best out of it.

The dam’s reservoir water stretches to the Gandhi Sagar Dam. The Rana Pratap Sagar Reservoir, a wetland formed by the dam, has been identified as a significant aquatic region with adequate flora for birdlife proliferation that requires bird species enumeration. The reservoir region is home to a sizable resident and migratory bird population.

Chulia is a beautiful waterfall in Rajasthan that is unlike other waterfalls we see. It is located near the Rana Pratap Sagar Dam. Chuliya waterfall is truly magnificent due to the naturally formed rocks that surround it.

This waterfall is also known as Chudiya Falls because the surrounding rocks have been shaped into a circular form that resembles a slew of bangles; hence it is locally called Chudia Falls.

This waterfall is located approximately 1.6 kilometers from Rana Pratap Sagar Dam. Although the beauty of this waterfall draws tourists, it is also a popular photography location.

Crocodile Point is located near the famous tourist destination Chuliya waterfall. The Chambal River is vital to the neighboring communities and is also home to a huge population of crocodiles.

Many of these crocodiles emerge to sunbathe in the winter, attracting visitors to this hidden paradise in Rajasthan.

Padajhar Mahadev is a hidden treasure found in the city of Rawatbhata in Rajasthan’s Chittorgarh district. It’s a lovely picnic location where you may spend quality time with your friends and family.

It’s a beautiful waterfall with a spectacular view from the vantage point. The water here is so pure that it tempts one to enter and enjoy the freshness. There is a temple near this waterfall; if time allows, pay a visit to the temple.

It is believed that Alauddin Khilji, the Delhi Sultan, attacked the fort and demolished all of the old temples and monuments. The fort’s earlier history is unclear. The fort has been converted into a magnificent heritage hotel by members of the erstwhile royal family.

This splendor fort hotel, bordered on three sides by rivers and nestled in the Aravali Mountains and lush woodlands, draws visitors from all over the globe to its location in Rajasthan.

The Bhainsrodgarh Wildlife Sanctuary is one of the most picturesque sites near the Rana Pratap Sagar Dam. The sanctuary, located near the impenetrable Bhainsrodgarh fort, is a one-of-a-kind experience that is both natural and historical in nature.

Chambal and Brahmani rivers and the entire area radiates tranquility that few other locations can match. On a visit to this sanctuary, visitors may witness WILD BOARS, FOUR-HORNED ANTELOPES, DEER, JACKALS, PANTHERS, FOXES, CHINKARAS, and HYENAS. Additionally, a great number of migratory birds may be seen here.

The Baroli Temple Complex is nestled in the hamlet of Baroli in the Rawatbhata town of Rajasthan’s Chittorgarh district. The temple complex is made up of nine separate temples that are all located in the same area or close to each other.

These temples were constructed in the 10th century AD and follow the architectural style of the Gurjara Pratihara dynasty. The Baroli Temple Complex is regarded as one of Rajasthan’s oldest temple complexes, despite the fact that the history and origins of the temple are not clearly recorded in the temple’s inscription.

This temple complex has idols of many gods and goddesses. The temple also had a stone-carved idol of God Nataraja until it was stolen and illegally sold to a British antique buyer.

HOW TO REACH AND WHERE TO STAY

Rawatbhata is within the Haadoti region of Rajasthan, and culturally it’s on the point of Kota. It doesn’t have a railroad station. But anybody can reach Kota(or Udaipur or Chittorgarh) by train and reach Rawatbhata by road. From Jaipur, the capital of Rajasthan, direct buses of Rajasthan Roadways is available towards Rawatbhata.

Since it has not been developed by the Govt. as a tourist attraction, decent staying facilities are not there. However, the visitor can stay at Kota, which is hardly one hour journey by car, and then enjoy Rawatbhata and nearby places by hiring a vehicle or using their own vehicle.