Drone View of Gateway of India :

The famous Gateway of India, situated in the capital city Mumbai is an arch monument established during the 20th century.

The reason behind building this monument is to commemorate the landing of King George V, along with Queen Mary, at Apollo Bandar in 1911, when they visited India.

The style of architecture used to build the Gateway of India is Indo-Saracenic. On 31st March 1911, the foundation stone was laid.

The monument is constructed using basalt, and the arch is 26 meters in height. The finishing designs of the monument, made by George Wittet, were endorsed in 1914. Later in 1924, they completed the construction of Gateway of India.

Many years later, the Gateway of India was used as an emblematic ceremonial entrance to India for the Viceroys and the new Governors of Bombay.

Overlooking the Arabian Sea, the Gateway of India is positioned on the waterfront near Apollo Bandar at the end of Chhatrapati Shivaji Marg.

The monument has also been mentioned as the Taj Mahal of Mumbai and is the city’s top tourist attraction.

You get to see many photographers, giant balloon sellers, vendors making bhel puri and other chaats, and more.

If you are in Mumbai during Feb/March, you can even experience the Elephanta Festival on Elephanta Island.

Apollo Bandar was a native fishing ground way before the gateway was constructed. It was between the years 1915 and 1919 the work started in this area to recover the land to build the gateway and a sea wall.

Besides, the last British troop to leave India, following Indian Independence, passed through this gateway with a 21 – gun salute as signaling the end of the British Raj on Feb 28, 1948.

As said earlier, yellow basalt and reinforced concrete were used to construct the gateway. It was from Gwalior, they brought the perforated screens, and the stones used were obtained locally.

You can see the Mumbai Harbor when you stand at the Gateway of India, and there are four turrets on the monument. They have also constructed steps behind the arch of the gateway that leads you to the Arabian Sea.

The intricate jali work, also knowns as latticework on stones is artistic. George Witter, the Scottish architect, used elements of the 16th-century architecture of Gujarat and the Roman triumphal arch to make a unique blend of style.

The arches on each side can hold 600 people as there are large halls.

Interesting facts about Gateway of India

Many people come here often to spend some nice time with their friends or family. Clicking sunrise and sunset pictures overlooking the immensely stretched Arabia Sea is mesmerizing.

This is a place where many photographs capture classic pictures and moments. Different varieties of delicious chaats are available here, and people can choose any of their favorites, and eat and walk around near the beautiful sea next to the Gateway of India.

Near this monument, you can see the Taj Hotel. Click candid pictures of you with Gateway of India and Taj since both these have an extremely unique style of architecture.

By Road – One of the popular cities in India, Mumbai is well connected with highways and expressways. Tourists from nearby states can take the highways to reach Mumbai. There are numerous government and private buses which operate daily to the Gateway of India. The bus stand is at the center of the city and very easy to spot.

By Air – The nearest airport is Chhatrapati Shivaji International Airport, situated 30 km from the CST station. You can get a taxi or bus from the airport to reach your booked hotel. Terminal 1 is the domestic airport earlier known by the name Santa Cruz, and Terminal 2 is the international wing.

By Rail – Finding trains to Mumbai is very easy. The railway station is called Chhatrapati Shivaji Terminus, and trains are available from all major railway stations in India. If you are choosing to travel by train, keep these train names in mind – Mumbai Rajdhani, Konkan Kanyakumari Express, and Mumbai Duronto.

On your visit to Mumbai, Elephanta Caves should never be missed. Near the Gateway of India, you can take a boat ride to the Elephanta Caves, which is adventurous and exciting to the tourists.

This has been recognized as the UNESCO World Heritage Site, which is a group of cave temples devoted to Lord Shiva.

You can see five caves and some rare Buddhist stupa hillocks, which date back to the 2nd century BCE.

The Elephanta Caves is positioned at a distance of hardly 200m from the Gateway of India.

This is a premier art and history museum, which was earlier known as the Prince of Wales Museum of Western India.

Chhatrapati Shivaji Maharaj Vastu Sangrahalaya is located on the southern side of Mumbai, and you can see the Indo – Saracenic style of architecture here as well.

At present, this museum building comes under the Grade 1 Heritage Building. It has also been granted the 2010 UNESCO Asia – Pacific Heritage Award for Cultural Heritage Conservation.

The main motive of Chhatrapati Shivaji Maharaj Vastu Sangrahalaya is to enhance the awareness and sensitivity towards the rich heritage of India through education in this visitor-friendly museum. 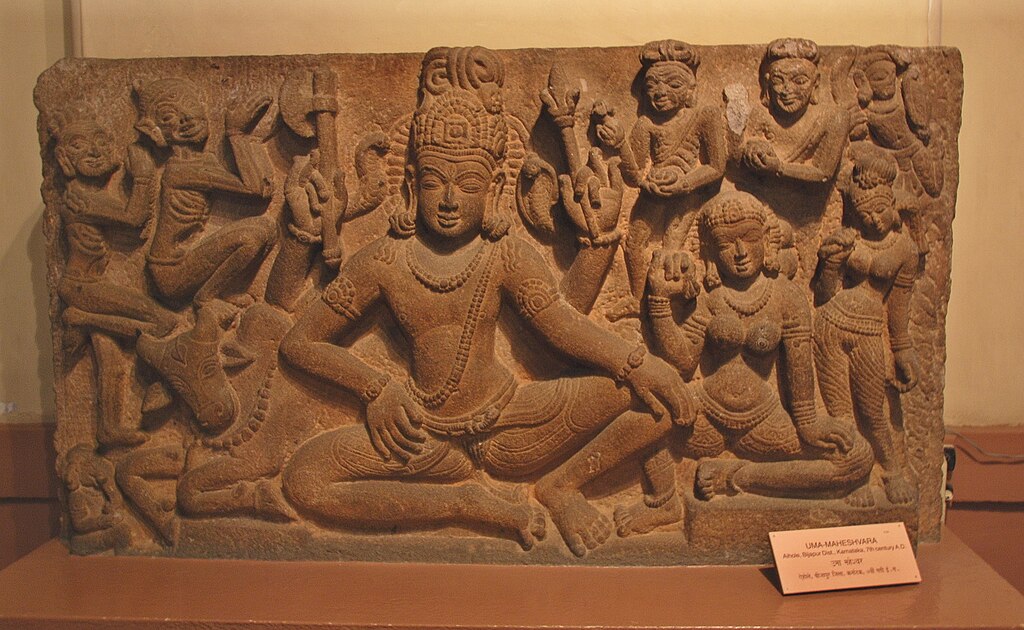 At a walkable distance of 550 m from the Gateway of India, you can find this spot known as Colaba Causeway for a great shopping experience.

This is a very happening and charming market in Mumbai and is the best choice for all the tourists. You can shop for a variety of items like clothes, jewelry, handicrafts, and much more.

For the foodies, there are many restaurants and food stalls where you can eat some authentic dishes in Mumbai.

The causeway is officially known by the name Shahid Bhagat Singh Road, which is a commercial street. Moreover, this street is also a major land link between Old Woman’s Island and the Colaba. 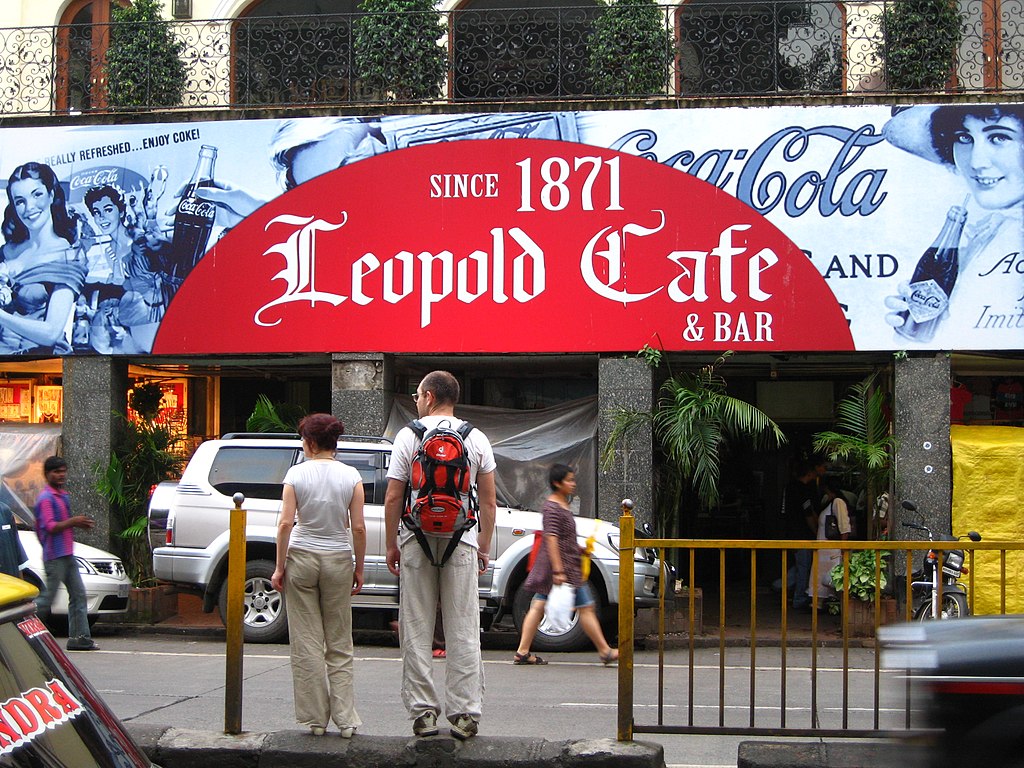 You might be wondering why a marine drive is known by the name Queen’s Necklace.

You should see it in real at night to understand why it is called that way. Along the Netaji Subhash Chandra Bose Road, the Marine Drive of Mumbai is a 3.6 km–long walkway.

It is a six-lane concrete road in the shape of ‘C,’ near the coast of the natural bay.

The walkway, Marine Drive, is known by the name Queen’s Necklace because when you look at it from a raised point near the marine drive, the street lights on the walkway look like a string of pearls on a necklace.

Find this beautiful sidewalk at a distance of 1.5 km from Gateway India. 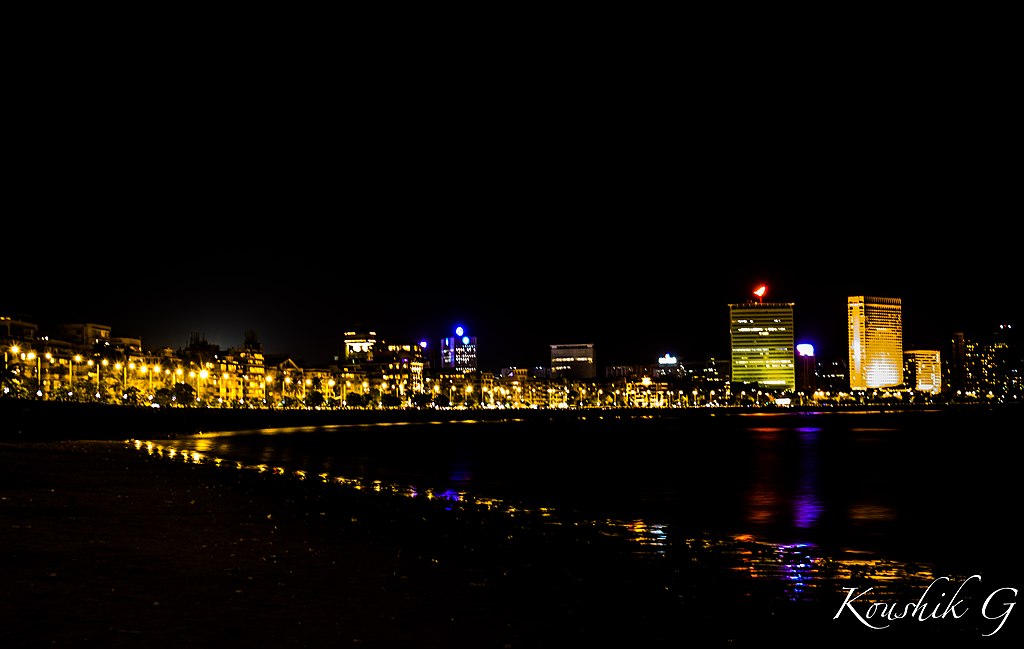 You might have surely seen this spot in many Bollywood Movies.

One of the expensive locations for offices in Mumbai is Nariman Point, where you can see some of the major business and financial establishments like Central Bank of India, Indian Express, Air India, State Bank of India, The Oberoi Hotel, and many more.

The major fascination of this point is the spectacular view of the Arabian Sea. The nightlife in Nariman Point is attractive due to the presence of star hotels, lounge bars, and pubs.

When you visit the Gateway of India, think about a stopover at Nariman Point, which is only 2km away. 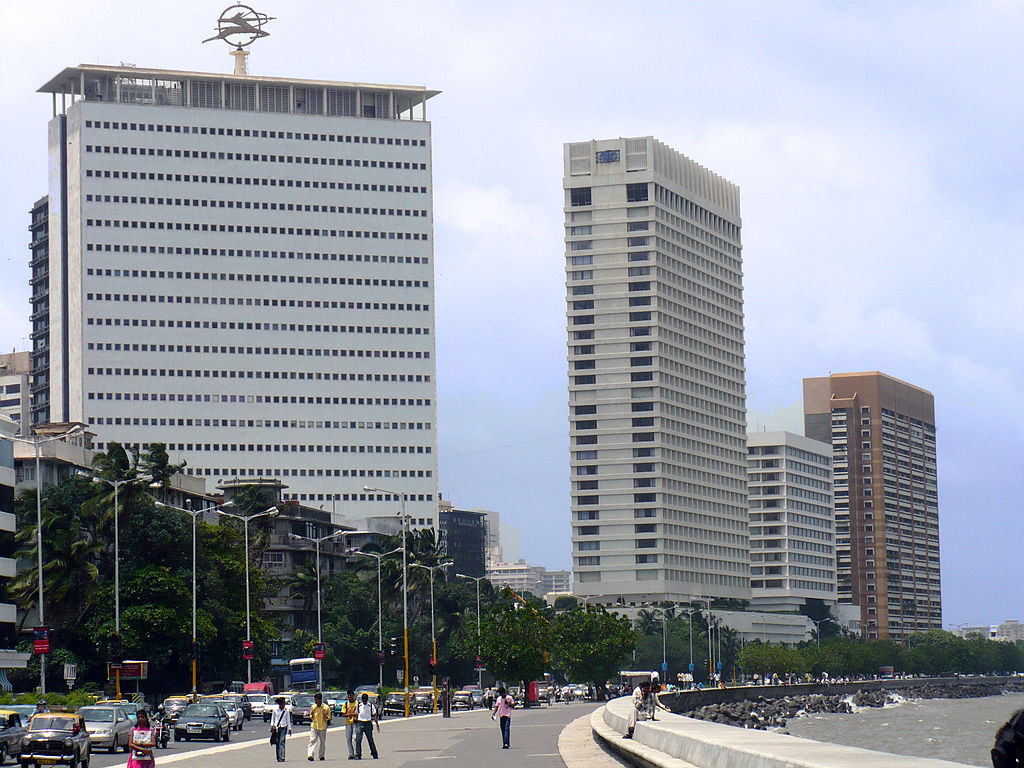 At a distance of 8.2 km, the Hanging Garden of Mumbai can be seen. The garden is also known as Pherozeshah Mehta Gardens.

It is a terraced garden hanging at the top of Malabar Hill on the western side. On the opposite side of the hanging garden, you can see Kamala Nehru Park.

You can see the beautiful sunset views here over the Arabia Sea. The garden features several carved hedges in the shape of animals.

Laid out in 1881, the hanging garden of Mumbai over Bombay’s main reservoir was built by Ulhas Ghapokar.

If you get to see the view of the garden from the top, you can see the letters PMG in cursive writing.

Maybe you can use a drone to capture this beautiful view. 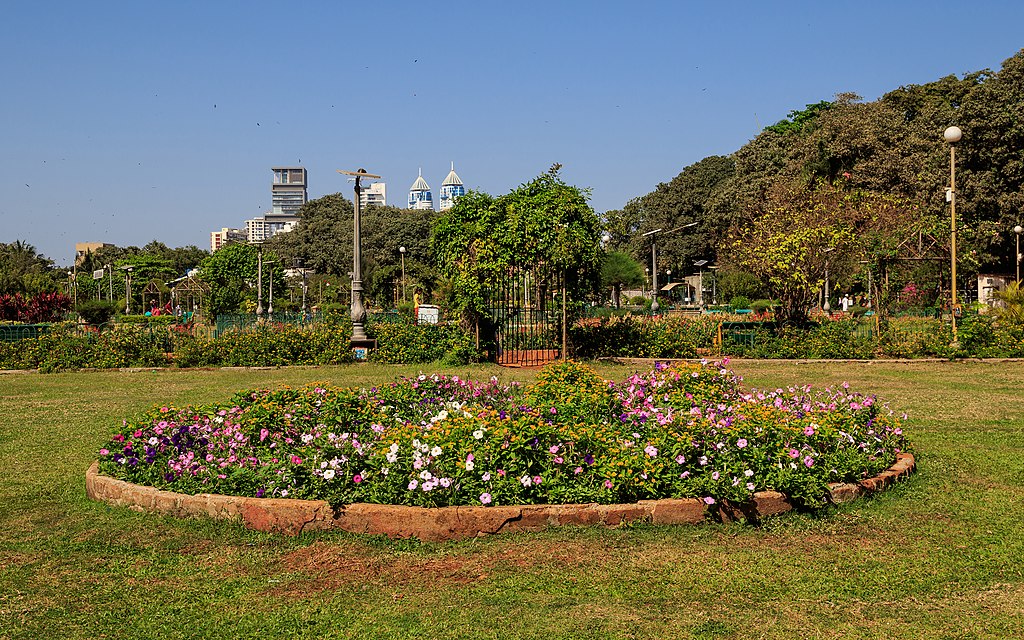 Very close to the Gateway of India, at a distance of 600m, you can see this Art Gallery.

It is established in 1952 that acts as a space for a prime art exhibition. The Jehangir Art Gallery conducts exhibitions of arts by painters, sculptors, craftsmen, printmakers, photographers, weavers, and ceramicists.

For the artists, this art gallery hosts many interesting lectures, workshops, and discussions on different types of art.

Jehangir art gallery is a perfect platform for all ambitious artists to showcase their work, network with artists, and even the local community. As a tourist, you can visit this gallery to experience the art and creativity of many experts.

One of the famous beaches in Mumbai is the Juhu Beach, located at a one-hour driving distance from the Gateway of India and 6 km from Mumbai airport.

You can see many elite celebrity homes near this beach. A lot of tourists visit the beach as there are several food stalls, serving platters of mouthwatering street food.

During the weekends, the beach is crowded with people enjoying horse rides and many other amusements. 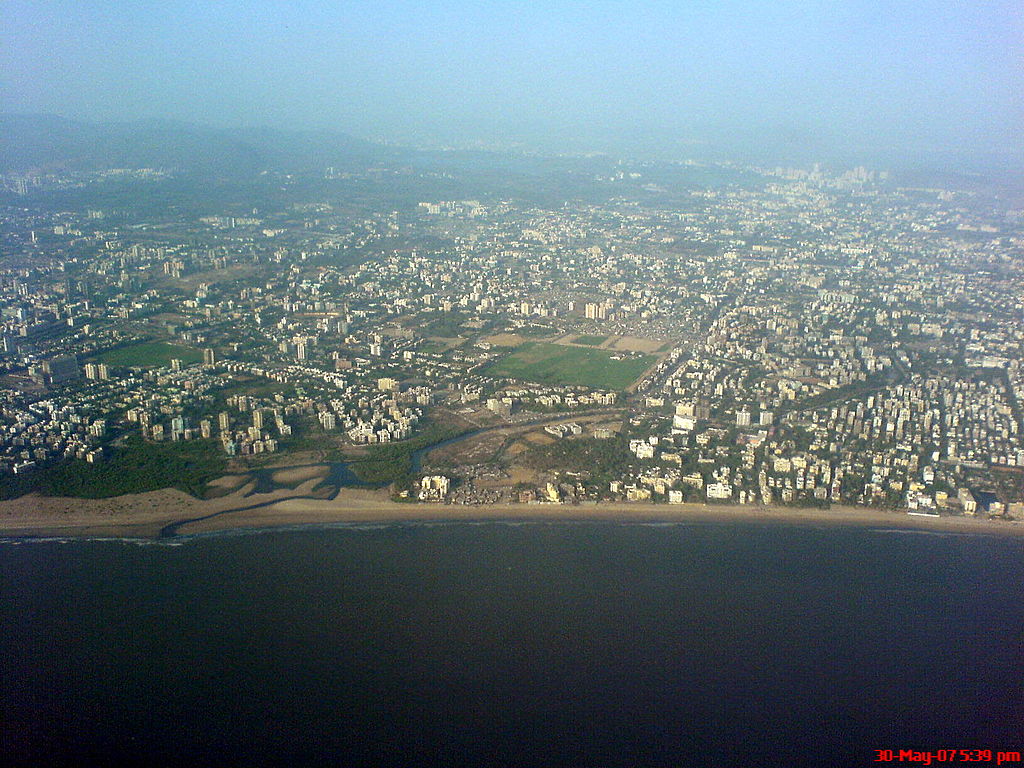