The dynamic city of Chennai is one of the four major metropolitan cities in India. It is a perfect juxtaposition of rich cultural history and metropolitan lifestyle.

Chennai is a wonderful amalgamation of monuments, museums, historical temples, and a plethora of beaches. The mouth-watering culinary delights will excite the traveler in you. Chennai is also known as the ‘Detroit of India.’ In October 2017, Chennai was added to the UNESCO Creative Cities Network list for its beautiful and rich musical tradition.

The best time to visit Chennai is during the winter season. The months from November to February are considered best for visiting Chennai.

The Chennai International airport is the fourth busiest airport in India in terms of international passengers and the third busiest Indian passenger.

The city of Chennai is well connected by the railways and hosts the headquarters of the Southern Railways. A rapid transit system of the metro connects the city and helps the public to commute daily.

Chennai is a part of the Golden Quadrilateral system of National Highways. The city has well-connected roads and flyovers to ease traffic movement.

Chennai has two ports. One is the Chennai Port, the largest artificial port in India, and the second one is the Ennore Port.

Among the numerous things you can enjoy in Chennai, here are our few top picks of Places to Visit in Chennai that you should not miss out on-

The longest natural urban beach in the country and the second-largest in the world, Marina Beach is a mesmerizing and serene sight to behold.

You can walk along the beach, relish the seafood delicacies, watch the sunset or the sunrise, and explore the shop selling souvenirs.

There are a few British architectural marvels in the vicinity of Marina Beach, like the University of Madras, The Senate House, and The Presidency College.

The Old Lighthouse, which provides a beautiful panoramic view of the city and the beach, is present. It is the only lighthouse in India with a lift. An aquarium in Marina Beach is known for its rare collection of tropical and freshwater fishes.

Best time to visit Marina Beach- is November to February.

02 Go Trekking On The Mountain Of Death

Sounds eerie, right? The ‘Mountain of Death’ or the Kolli Hills or the Kolli Malai is a mountain range located in the Namakkal district of Tamil Nadu.

The mountains are extremely famous among tourists with aesthetic natural beauty and religious significance.

The Arapaleeswarar Temple of Lord Shiva is located here. The hills are covered with dense vegetation, and treks on Kolli Hills are said not to be complete unless you visit the Akash Ganga Falls.

Agaya Gangai or the Akash Ganga waterfalls are considered sacred because it falls near the Arapaleeswarar Temple.

These mystical falls are dangerous to visit during the monsoons and should be avoided.

The Arappaleshwarar Temple is an ancient temple dedicated to Lord Shiva and is considered sacred all over South India. This sanctum was built by the Chola dynasty.

Timings of Arappaleshwarar Temple– 7 am to 7 pm.

03 Seek Blessings At The Ashtalakshmi Temple

Located a few meters away from the Besant Beach on the coast of the gorgeous Bay of Bengal, this Temple is the abode of the goddess of wealth and knowledge.

It is believed that anyone who visits the temple to offer their prayers with a clean soul is blessed by the Goddess. The continuous sound of the ocean waves echoing in the sanctum creates an aura of peace. The temple has all the eight forms of the goddess Lakshmi. The temple architecture is to marvel at.

The nearest airport to Ashtalakshmi Temple- is Chennai International Airport. 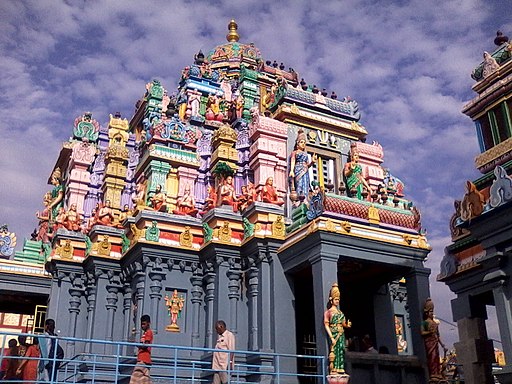 Constructed in the memory of Saint Thomas, this search has presently evolved into a Basilica. Situated in Mylapore, this church will take you back into the historical centuries.

It speaks of the time when Christianity advanced in India. Built-in in a typical neo-gothic style of architecture, this church is stark white with sheer grandeur.

This church has the tomb of Saint Thomas and a museum of antiques.

The nearest airport to Santhome Church – The Chennai International Airport.

There are numerous restaurants and street-side food corners for you to relish these delicacies. You can also enjoy the cast array of seafood available in the city.

The city is one of the most versatile cities in India. From high-rise buildings to beautiful calm old-world villages, the city of Chennai has enough to offer.

This concludes my research on Places to Visit in Chennai. Let me know your comments and suggestions.