Cuisine Of West Bengal: Bengal is famous for its delectable cuisine, which will charge up your taste buds.

From a plethora of mouth-watering desserts and confectioneries to the best of fish curries, Bengal is famous all over the globe for few of its culinary delicacies.

Rice is the staple diet of West Bengal along with various preparations of fish.

Being a heavily agrarian state, West Bengal is somewhat unique in its food habits. Bengalis can make ambrosial dishes out of rejected peels, stocks, vegetable leaves and other such strange items.

They use mix of spices called ‘panch phoron’ which is a mixture cumin, fenel, fenugreek, kalonji and black mustard seeds in most of their dishes.

This is a trump card of their cuisine. They use kasundi, which is basically a mustard sauce as a dip.

The Bengal culinary style is spread to West Bengal and Bangladesh primarily. The states of Tripura and Assam have a huge Bengali population and hence the form of cuisine being prevalent there as well.

The Bengal culinary style has been influenced by the Nawabs, Turks, Mughals, Christians, Jews and many other traders and immigrants in the past.

Delectable dishes of West Bengal which are a must have-

Hilsa or Ilish is known as the queen of fishes and is found abundantly in Bengal. Fish is marinated with turmeric and salt and simmered delicately.

It is made in both tried and curry forms and served as a side dish with bengali khichuri for white rice.

Jumbo prawn (chingri) curry cooked with mustard and coconut milk is served in tender coconut. This recipe e is known as daab chingri.

Another prawn delicacy is chingri macher malai curry. Palatable prawns are cooked in creamy coconut milk with best of spices. This curry served as a side dish with white rice or pulao. 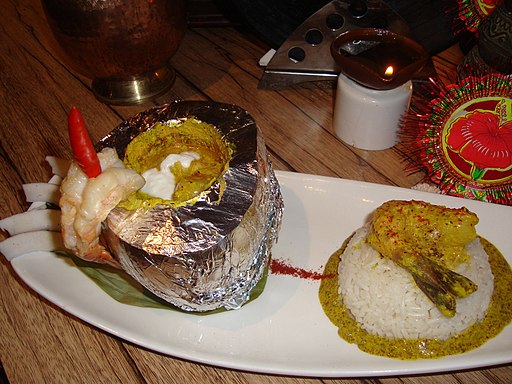 Had enough of fishes in Bengal? The Bengali Mutton curries are not to be considered any less.

Mutton marinated in creamy yoghurt and cooked in mustard oil along with fragrant spices is another delicacy in West Bengal. Bengali mutton curry has several versions to it.

The classical age-old delicacy of ‘Mangshor Jhol’ is a comforting light curry which is thin in consistency. Mutton pieces here is cooked with large sized potato chunks.

The hot curry is plated with steaming hot rice. Mutton kosha is another iconic delicacy. This is a gravy form of the mutton curry. This is made by slow cooking over a low flame for a very long time.

The mutton pieces become tender and melt in the mouth. Mutton kosha is served with parotta, pulao, luchi, and even plain rice.

Best places to have Mutton Curry in Kolkata are-

Biryani is famous in various parts of the country but Kolkata biryani has few unique attributes to it.

Tender chunks of fish cooked in creamy yoghurt with spices is another mouth watering fish curry of Bengal. It tastes best when served with plain white rice. It is primarily made in households during special occasions.

These marinated fish fillets are then wrapped in small parcels in banana leaf. They are simmered or pan-fried on low heat. If you can cook the paturi over coal fire, the undertone of smokiness makes the dish even more tasty.

Initially paturi was made with Ilish Mach or Hilsa but due to it’s rising price bhetki became more popular for making paturi.

The chicken used for this recipe should be fresh and never frozen. this recipe is extremely basic and made with very less items.

Chilli paste, a generous quantity of ginger, garlic and onion, a bit of spices is all you need for the recipe.

Some of the spices are used completely ungrounded and some semi grounded using a  ‘sheel nora’. The curry is thin in consistency and is drizzled with a good unrefined mustard oil at the end.

This is special Sunday delicacy in almost every Bengali household.

No Bengali Sunday is complete without luchis. This is a deep fried, small sized, chapati with a golden glow made with maida instead of atta flour.

Luchis are had with aloor dom, chicken curry, mutton curry, chana dalna, chhola daal and other such finger licking curries typical to Bengal.

Best place to have Luchi and Aloo Dum- Fairlie Place at B.B.D Bagh and Koshe Kosha at Golpark, Kolkata.

With addition of ingredients like bay leaves, coconut bits and cinnamon the taste of the cholar dal increases manifold. This is a perfect companion of luchi for a Sunday brunch.

Aloo or potato is one of the staple vegetables in a Bengali household. There are different dishes and curries made with potatoes but aloor dum is one of the tastiest dish is out there.

Made with chunks of potatoes, fragrant spices into a thick curry and garnished with fresh coriander, this recipe hits differently and is served mainly with luchi.

Shukto is a combination of various vegetables like bitter gourd, drumsticks, brinjals, potatoes and bori, a Bengali speciality again made out of lentil paste.

This mixture of vegetable is made made into a thick curry with best of ground at spices and milk. This is usually had at the start of a meal and is believed to be extremely nutritious and healthy.

Shukto is a household recipe. It is also made during occasions and feasts.

Lau or bottle gourd is finely chopped and cooked with light spices and boris. This is a very light and delicious delicacy which is considered very good for the stomach.

Bottle gourds have high water content and will rest your stomach after a hard day at work.

Mocha is banana flower and high in iron content. This is again chopped finely and cooked with crushed coconuts, bay leaves, cumin, potato and some other spices.

This is another healthy vegetarian delicacy in West Bengal.

Raw mangoes are burnt partially till charring. This is smashed and chilled water and sugar with a pinch of black salt is added and a refreshing, relaxing and mouth watering drink is ready.

Ideal for the heat experienced in major parts of Bengal, this drink is one of the best natural drinks that will rejuvenate you.

Misti Doi from Bengal is famous all over the country and is a must have for everyone with a sweet tooth.

This is another unique bong dessert made mostly during ‘Poush Parbon’, a small celebration which takes place during the Bengali month of Poush (mid-December to mid-January).

This is made with batter powdered rice and rolled with mixture of cooked jaggery, khoya and coconut as filling.

The world famous Bengali sweet rosogolla is a soft, round, mostly white desert made with chena and dipped in sugar syrup.

During winters nolen gurer rosogolla is another variant of the desert where instead of dipping it it into sugar syrup it is dipped in jaggery syrup.

Best places for having Roshogolla- KC Das and Grandson Pvt. Ltd opposite Kalighat, Balaram Mullick and Radharam Mullick in Paddapukur Road, Bhowanipore,Kolkata are famous for their mouth-watering rosogollas.

These are a few of the most delectable dishes in Bengal. Apart from these, street food and sweets in Bengal are to die for. Bengalis are known for their voracious appetite. With an array of culinary delights, Bengal never fails to amaze us.