India is a land of culture and heritage. Diverse communities live in India. As correctly said, India is the perfect example of land with ‘unity in diversity.’

Indians are known for their rich traditional believes and attires. Traditional attires may be the extravagant Sabyasachi lehenga or a plain simple khadi Gramin dhoti.

Indian wardrobes also vary from one state to another, from one region to another. Every place has its own unique clothes and style.

Mekhela Chador is typical of the state of Assam. The women wear it in Assam.

It is a saree consisting of two pieces of cloth. One piece is worn on the top and the other from the waist below. The bottom half is prominently known as ‘mekhela.’ It is cylindrical in shape.

The chador is tucked from one end into the mekhela, and the other end is wrapped around the upper portion of the body like a palla.

Assam is known for its world-famous quality of silk. Sualkuchi is situated in Assam and is a famous town for the production of silk.

Mekhelas are woven here from Muga, Eri, and Pat silk.

Saree is a garment worn by women in the Indian subcontinent. It is an unstitched drape that ranges from 5 to 9 meters.

It is draped around the waist with one, and the other end is draped over the shoulder. The waist remains partly bare.

There are multiple styles in which a saree is draped. Some common ways of draping saree are the Nivi

There are 80 recorded drapes of a saree. The history of draping saree dates back to Indus Valley Civilization.

There is multiple fabric from which saree is made. They are silk, cotton, linen, chiffon, georgette. Various Indian fashion designers have revolutionized Saree draping.

The Nivi style drape was created during the colonial era in India. It is the most popular drape in current times. It represented Victorian Era fashion in India.

Almost every region of India has a separate saree drape.

Kurta is the traditional menswear of India. There are various forms to it. In Bengal, it is known as Panjabi. An adorned and festive version of the kurta is sherwani.

Men wear it during festivals and special occasions with pajamas. Sometimes pagri is added during special occasions. It is a loose collarless shirt not only in India but in many regions of South Asia.

The history of kurta goes back to the invasion of Mahmud of Ghazni. The attire probably has come from Central Asia.

There are various styles of kurta. Local embroidery adds a regional outlook to a traditional kurta.

The Kantha embroidery of Bengal, the crochet designs of Punjab, the phulkari of Punjab, Bandhni dying of Rajasthan, the Sindhi kurtas are some of the examples of kurtas.

Lungi is a men’s outfit worn mostly in Southern parts of India. It is great to escape the summer heat and extremely comfortable to wear. It is an unstitched piece of cloth.

They are made up of silk as well as cotton. Men in South India usually pair it with slim-fit shirts.

It is a comfortable garment and is famous in Bangladesh, Singapore, Cambodia, Thailand, and Burma.

The Keralian white lungi has golden embellishments as the border and is worn on ceremonial occasions. Regular lungis are colorful. 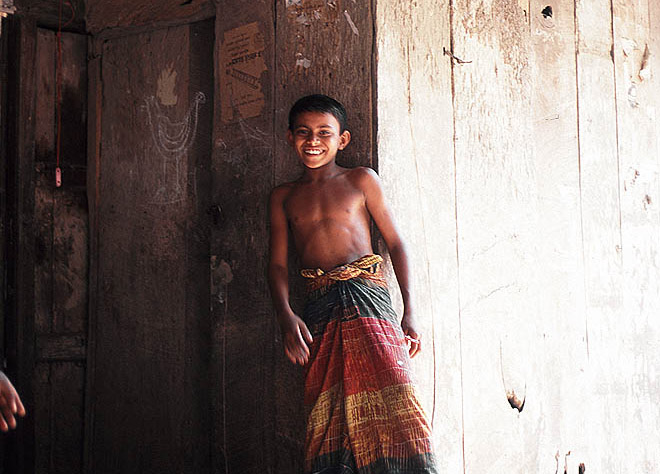 Dhoti is another traditional outfit of India. It is a men’s bottom wear and was worn extensively during ancient times.

It is a loincloth wrapped around hips and thighs with one end and brought between the legs and tucked into the waistband. It represents hollow loose trousers.

Usually, a minimum of 4.5 meters is required for the dhotis. Dhoti is considered a counterpart of the saree.

It is worn for ceremonial occasions in India. It has evolved from the ancient ‘antria’ worn during ancient times. In Indian mythology, Gods are depicted wearing dhotis.

Ghagra Choli is an extremely popular Indian attire worn by women. It is prevalent in Gujarat and Rajasthan.

Indian fashion designers and the film industry has given a completely new look to the traditional Ghagra Choli. A variety of Ghagra Choli is available in the market based on the occasion.

There are heavily embroidered Ghagra Choli. Ghagra Choli is the traditional dress worn during Navratri. The one worn in Navratri usually has mirror embellishments.

A Odhni or dupatta is added to add grace to the outfit. It is a combination of a long skirt known as Ghagara on lehenga and Choli, the blouse.

They have heavy embroideries on them; in North India, Ghagra Choli or lehenga forms the bridal attire. It is also worn during the Garba festival order Navratri in Gujarat.

The salwar is also known as churidar and is paired with the Kameez. It is worn by women across India and is a famous traditional dress.

Kameez is varied from being ankle-length Anarkali suits to short Kurtis. They come in various prints, patterns, embroideries, and fabrics. It’s teamed up with a churidar.

Salwar kameez was introduced in South Asia after the arrival of the Persians. There are a lot of forms to it.

Punjabi women mostly were kameez with a loose version of the churidar known as Patiala. Patiala’s pants are baggy and loose.

Turban is another traditional attire worn by the people in India. It is a piece of cloth turned into headgear. It signifies religious importance for several communities.

It also depicts valor and honor for the Sikhs, Maharashtrians, Rajasthan royal families, and all tie turbans on their heads.

For the Rajpoots, it signifies royalty. There are a lot of different ways in which it can be worn. The origin of turbans is yet to be discovered.

Here are Some more traditional clothing in India

Kediya is a traditional kurta that is paired up with a dhoti or chorno. Men in Gujarat wear it.

It is a traditional dress of the Gujarati and is mostly worn during Garba of Navaratri.

It is a kind of Angrakkha kurta with frills around. Men add a turban to complete the look. The headgear is also known as Phento.

It is extremely popular in the rural regions of Gujrat. Gujrati men add a lot of gold and silver jewelry to accentuate the look.

Pathani Suit is popular in India and worldwide and is worn by men on special occasions. It has an aura of sophistication and royalness. It is very popular in South Asian culture.

It is a Muslim attire originally, but presently it is worn worldwide by people belonging to different religions and cultures.

The Pathani Suit is essentially a three-piece garment and comprises a kurta, a waistcoat or vest, and a salwar (loose trousers). It is also called a Kabul suit or a Khan suit.

It has evolved from a traditional pathani dress called the Perahan Tunbaan. Perahan is similar to kurta and Tunbaan to a salwar.

Bollywood actors in multiple movies have worn this outfit. The king of Bollywood, Shahrukh Khan, wore Pathani suits for his iconic role of an underworld mafia in the movie Raees.

Taranga is a headgear worn by native Kashmiri women. It is a bright and vibrant, usually red-colored headdress with exquisitely detailed embroidery work on it.

The cap is worn along with a dupatta flowing from the head to give it a feminine look. It is worn during wedding ceremonies in Kashmir.

The dupattas are stitched with the cap at the back and flow down towards the heels. Lots of jewelry is worn along with the Taranga.

An aesthetically beautiful Kashmiri woman would ideally be wearing a Pheran with Taranga and lots of silver jewelry.

It keeps the head and neck warm in the chilly cold weather of Kashmir. Silver trinkets are used to tighten up the Taranga.

Kashmiri shawls are a famous export from India. This distinctive shawl is famous for its finish. Kashmir is where authentic pashmina wool is available, valued for its warmth, lightweight, and finished.

The shawl was originally made for the Mughals and the nobility.

During the eighteenth century, when the British were ruling over India, this pashmina was used by Queen Victoria of the United Kingdom and Empress Josephine of France, who popularized this as a symbol of luxury and exotic.

There Kashmir started to mass-produce. These shawls are presently sold at high rates and exported all over the world.

Pattu Pavadai or Langa Davani is widely in South India and Rajasthan by teenage girls. It is a cone-shaped skirt made out of mostly silk, which hangs from the waist to the toes.

It usually has a golden border to it. Small girls and teenage girls mostly wear them. There are smaller versions for newborn baby girls also.

The top and the skirt are usually made of contrasting colors. It is worn for ethnic occasions like naming ceremonies, weddings, and festivities.

Bandhgala or Jodhpuri is a formal suit from the state of Jodhpur in Rajasthan, India. Jodhpuri was extremely popularised during the British Raj in India.

The Bandhgala is worn mostly during formal gatherings and weddings. It is made out of mostly silk. Jodhpuri can be plain or with jacquard, zardozi, or jamewari work on them.

Phiran is a traditional Kashmiri attire worn by both Kashmiri men and women. It is a long cloak made out of wool. Phiran has become famous across borders.

It was originally designed to protect the body from the chilly winters of Kashmir. The origin dates back to the Mughal Era. The attire has a royal and regal feel to it.

Currently, various styles of phirans are available in the market. They have intricate embellishments and ornate zari works, which give them a majestic look.

Phirans worn by the Hindu Kashmiri women are ankle length with narrow sleeves. Women belonging to the Muslim society of Kashmir have phirans of knee-length and broad leaves.

Phirans are also worn in Pakistan and Afghanistan. Kashmiri Phirans are made out of real wool; hence it is on the pricier side.

Jainsen is an unstitched garment made out of mulberry silk and draped around the body.

It is the traditional dress of women in Meghalaya. Mulberry silk is cultivated in Meghalaya, and it is woven out of it.

The dress has a tribal feel to it. Women belonging to the Khasi tribe wear a blouse along with Jainsen.

The Sharara is a replacement for the traditional Ghagra. It has pleated loose ornate trousers. It is worn with the long kameez and paired with a dupatta.

It is a traditional Lucknowi attire that originated during the time of the Nawabs. It has created a huge hype these days. It is worn all over the world by women.

It is extremely popular in Pakistan and Bangladesh. The Knee area is known as the Gota in Urdu and is often elaborated with intricate zari and zardozi work. It is mostly made out of silk brocade.

These are just a few pieces from the treasure trove of Indian traditional attires. Do consider having these pieces in your wardrobe, as they will definitely accentuate your look.

Also, Read The statue of Unity – The Pride of India.