King Cobra is the official National Reptile of India. Also know as ‘Nag’. It is the world’s longest and most deadliest venomous snake. Adult cobras can reach a length of 18 feet and are rarely hostile.

They will not attack unless provoked. During an attack, cobra can lift one-third of their bodies off the ground and hiss. Despite its habitat of lush rain forests and dense rainforests, this wary creature is rarely seen.

The neurotoxins released by these venomous snakes have the potential to kill up to twenty persons or an elephant in a single bite. 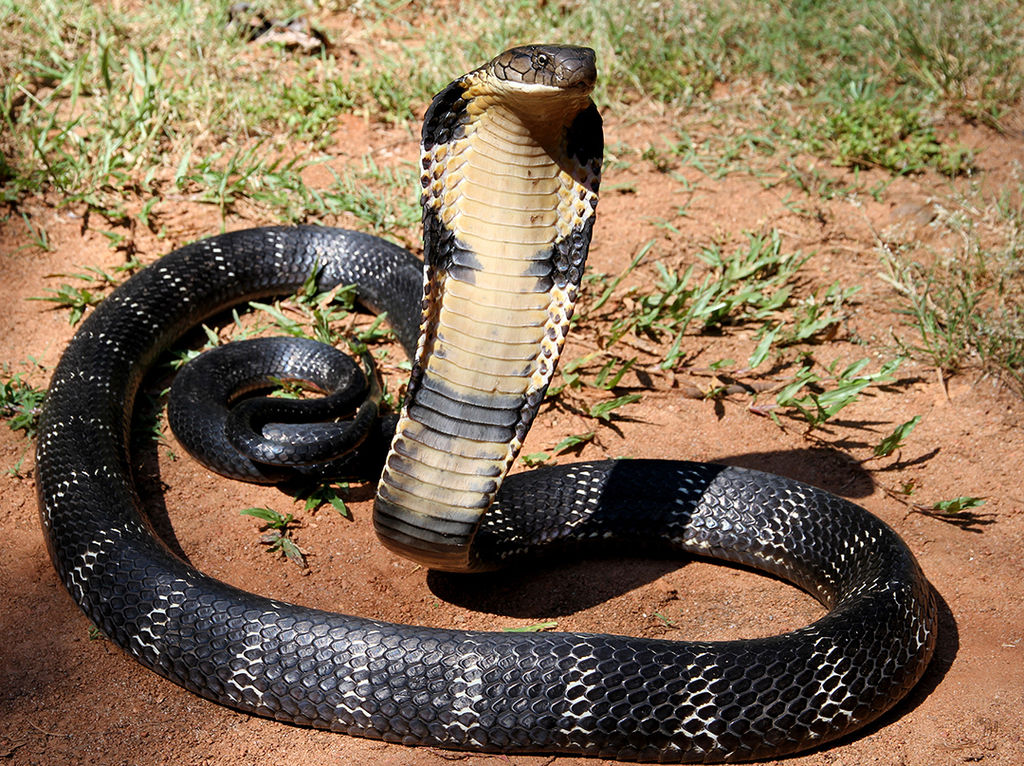 Nag Panchami is an auspicious festival in India and is celebration on the 5th day of Shukla Paksha in the Sawan month. The serpent which is seen placed round the neck of Lord Shiva is worshipped by Hindus in India on this day. Nag Devta has an special place in Hindu mythology and worshiped.

There are many mythological scrptures namely Mahabharata, Narada Purana, Skanda Purana,  and Ramayana that has many stories depicting snakes. As per Garuda Purana, worshipping the snakes during Nag Panchami will bring good fate and prosperity to its devotees.

The Hindu scriptures mention that  Kansa had sent a snake by name of Kaliya to kill Krishna.  Lord Krishna not only defeated the evil snake, but also sat on its head playing the flute.

The New York Zoological Park received another captive specimen in 1972, weighing 12.7 kilograms or 28 pounds and measuring 4.4 meters or 14 feet in length.

These snakes’ length and mass are determined by a multitude of factors, including their environment. Despite their immense size, king cobras maintain an alert and quick demeanor.

Typically, the skin of this snake is olive-green, brown, or black. The crossbars that run the length of its body are pale yellow and extremely faint.

This snake’s pale yellow or cream-colored belly aids in its smooth scaling. Often confused with a banded krait, its juveniles are black but glossy with small yellow bands, with the exception of a fully flexible hood.

Mature cobras have a huge head that appears bulky, similar to the rest of the snakes, but they do have the ability to widen their jaws to swallow smaller snakes or other animals.

The front half of its mouth is equipped with two tiny fixed fangs that inject venom into the prey it captures, much like a hypodermic needle might.

Male cobras are larger and thicker than female cobras. Wild king cobras have an average lifespan of twenty years.

Each row, however, has subcaudal scales that are either paired or single, with the typical numbers 83 to 96 for male cobras and 77 to 98 for female cobras.

If you’re lucky, a visit to one of India’s National Parks, such as those listed below, may provide you with the best chance of viewing the King Cobra, the country’s national reptile.

The king cobra is found primarily in South Asian and Southeast Asian countries, but it has also been spotted in the southern sections of East Asia, most notably China’s southern provinces.

Cobras are frequently encountered in densely forested environments with lakes and streams. Rapid deforestation has had a detrimental effect on the cobra population, which has decreased considerably over time.

It is classified as an Appendix II Animal by CITES (Convention on International Trade in Endangered Species of Wild Fauna and Flora). 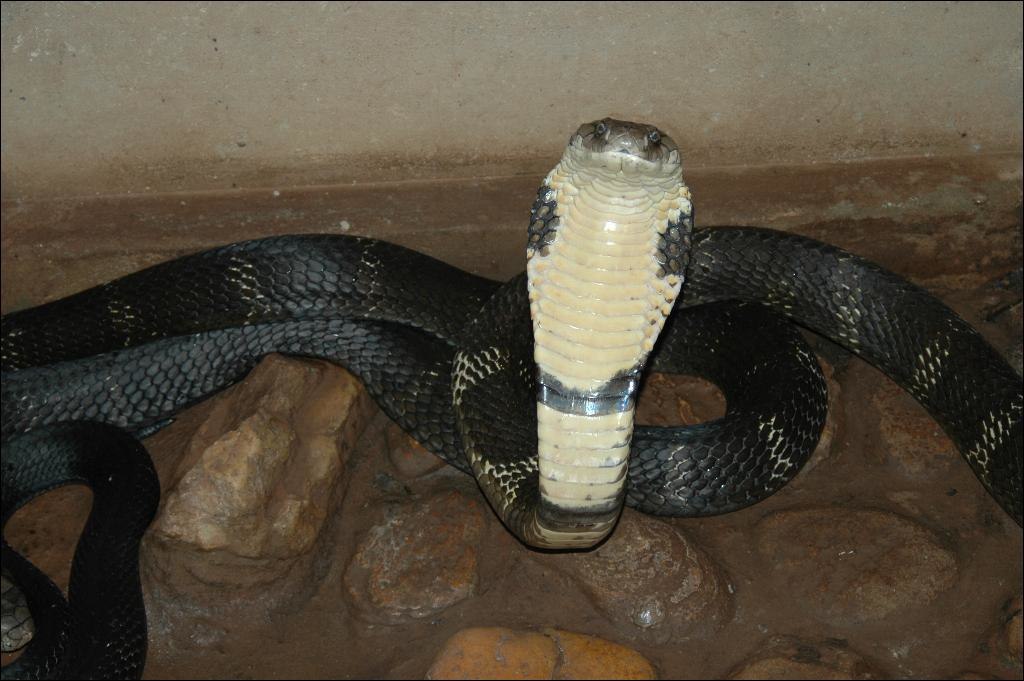 The king cobra’s forked tongue receives chemical information in the same way as other snakes’ tongues do. It works by capturing fragrance particles and delivering them to Jacobson’s organ, a sensory receptor on the roof of the mouth.

These characteristics are very similar to the capabilities of the human sense of smell. When the fragrance of a meal is detected, this snake sweeps its tongue in search of prey, for which the tongue’s twin forks act as stereos.

The king cobra’s additional characteristics include superior intelligence, earth-born vibration tracking sensitivity, and exceptional eyesight that can identify even moving prey at a distance of approximately 100m or 330 feet.

Having finished injecting its venom, the king cobra moves on to swallowing its prey. However, the toxins have a tremendous effect, and the victims are readily digested.

It is comparable to that of other snake species in that the jawbones and malleable ligaments of king cobras are strongly attached, allowing the lower jaw bone to move independently under all conditions.

In order to consume whole prey quickly and readily, the king cobra will sometimes ingest prey that is larger than its head, which will be digested once the prey has been swallowed whole.

As the Greek-derived generic name of the king cobra implies, Ophiophagus is a snake-eater whose primary meal consists of rest snakes ranging in size from rat snakes to miniature pythons, as well as other dangerous snakes.

Even some snakes belonging to the genuine cobra or genus Naja are prey. Additionally, it is capable of consuming additional dangerous krait family snakes.

If conditions deteriorate and cobras do not find sufficient prey, they will hunt other species such as birds, lizards, and numerous sorts of rodents.

Even birds and rodents become prey if there is a food shortage. It uses its powerful body to capture huge rodents, albeit this is not a typical occurrence.

Due to its poor metabolic rate, it may remain dormant for months after consuming large meals. Rat-snakes are the most popular prey item for king cobras, and when seeking for them, cobras may come dangerously close to human settlements on numerous occasions.

If aroused, it may become excessively violent. When cobras are threatened, they alter their appearance by rising up the anterior third of their body and extending their neck to reveal fangs. They also continue hissing loudly.

Any rapid movement or near proximity to items can easily irritate cobras. The king cobra continues to advance even as it raises its body for attacks, which becomes the misjudging scene for those who assume they are safe despite the fact that they are not.

Its single strike may result in multiple bites, and adult cobras maintain control of prey once bit. This snake attempts to flee immediately, despite the fact that it is far too deadly.

It attacks only when it is unable to move. Because cobras typically live densely forested places that are sparsely populated, their encounters with humans are rare.

When confronted by natural predators, particularly mongooses, the king cobra attempts to fly, as it is aware of the resistance level of its adversaries. Mongoose hisses in addition to forming a distinct cobra hood in these conditions in order to maintain strikes with the fabricated closed mouth in defense.

These are the procedures that prove effective since such preys are more dangerous than the rest and are of a size that a comparatively smaller mammal can easily kill.

The best defense against a cobra attack is to exercise caution in such instances, which means removing a shirt or taking a hat and throwing it on the ground to create confusion for it.

It is odd but noteworthy because king cobra hisses generate misconceptions due to their pitch being lower than that of other snakes. That is why its hisses are frequently referred to as growls rather than hisses of perplexity.

While the hisses of the rest of the snakes range from 3,000 to 13,000 Hz, and in some cases up to 7,500 Hz, the growls of the king cobra are radically different and rarely exceed 2,500 Hz. Its primary frequency is merely 600 Hz, which is unquestionably the lowest and sounds like the human voice, therefore not more than that.

According to comparative anatomical morphometric analysis, unique findings such as the discovery of tracheal diverticula whose function is to maintain low-frequency resonating chambers in this dangerous snake and its preferred prey mangrove rat snake are similar and consist of nothing more than growls to maintain misguidance have come to light.

Among snakes, the king cobra is exceptional in that its female groups are continually engaged in parenting activities. Female cobras construct a nest to properly store eggs, as well as rubbing leaves or trash into the knoll to ensure proper deposit, ensuring that the nest is maintained until the eggs hatch and the young are groomed.

Female cobras act as incubators, laying between twenty and forty eggs in preparation for mounding. Her primary goal remains to monitor eggs by remaining with them, which she accomplishes by taking strenuous measures to secure the mound.

Additionally, she issues notifications in response to perceived threats, most notably the arrival of gigantic monsters. This method is repeated for 60 to 90 days, or until the eggs reach a steady temperature of 28 °C or 82 °F inside the mound.

When the female cobra realizes her eggs are ready to hatch, she will physically flee the area and begin seeking prey, as she has misgivings about eating her own children out of desperation.

Baby king cobras range in length from 45–55 cm (18–22in) and possess the same fatal venom as adult cobras. They are vibrantly colored and maintain an alert and active demeanor.

As is widely believed in India, Nepal, and numerous other South Asian countries, the King Cobra possesses an amazing memory. According to legends, the well-adorned snake is capable of recalling the picture of a cobra killer. Then they utilize the image’s memory to seek down the killer in vengeance. That most emphatically sounds like a brain behind the snake, and it’s also horrifying.

In Southeast Asia, the king cobra is mostly endangered by habitat destruction caused by deforestation and agricultural expansion. Poaching for its flesh, skin, and for use in traditional Chinese medicine also poses a threat to it.

The king cobra is designated as an endangered species in Appendix II of the CITES (Convention on International Trade in Endangered Species of Wild Fauna and Flora). In China and Vietnam, it is protected. In India, it is listed under Schedule II of the 1972 Wildlife Protection Act. Killing a king cobra carries a maximum sentence of six years in prison.

The King Cobra is classified as ‘Vulnerable’ on the IUCN Red List of Threatened Species. There is no definite count of King Cobras in India, however, they have become scarce in the majority of areas over the last few decades.

India’s population is estimated to have declined by 30% during the last 75 years, primarily as a result of habitat degradation. A recent study of the snake in northeast India discovered that, despite the species’ wide biological range, the majority of sightings happened within or next to protected regions with huge, unbroken, undisturbed forests. In India, the snake’s main concern continues to be habitat destruction and fragmentation.

In order to rescue this amazing creature, education and public awareness are two of the most effective tools we have at our disposal. Beyond the fact that King Cobra contributes to ecological balance by predating on other snakes, the snake’s common image as a dangerous and aggressive adversary must be challenged.

King Cobras are shy reptiles that will go to any length to avoid coming into contact with humans. In contact with humans, they are only forced out of their natural habitats by manmade causes like as logging and agricultural development, which cause them to become disoriented. The use of educational and public awareness efforts can assist in alleviating the plight of the species.